Moving from here to the end of Genesis, you may want to have one of these printed.  Some like super simple, some like more complex.  Check these out. 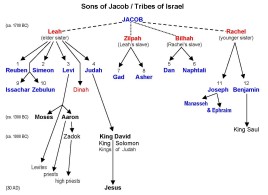 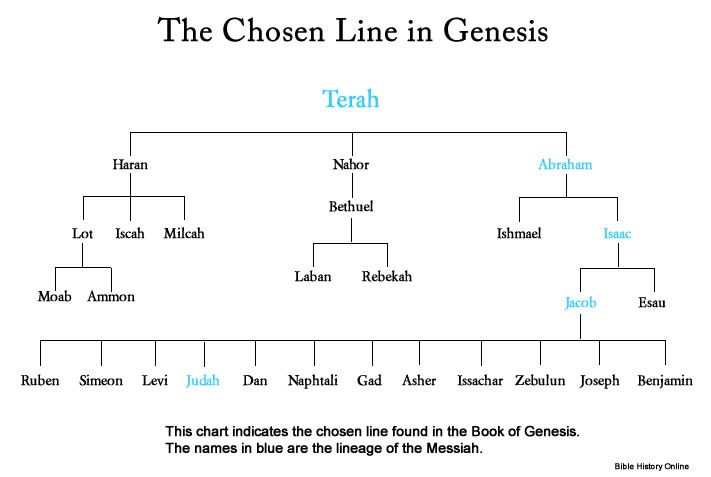 If you rolled out of bed,  picked up your phone  and are reading this and ponder checking facebook…don’t.  It’s a HEAVY read.  Ain’t nobody got time for that!

So yesterday Jacob took Esau’s birthright.  Yes it is a big deal, but not nearly as big a deal as what happens today.  There are so many details to this story so we will talk about a few and in 10 years when I do the read through again, we will catch the rest.

28 May God give you heaven’s dew
and earth’s richness—
an abundance of grain and new wine.
29 May nations serve you
and peoples bow down to you.
Be lord over your brothers,
and may the sons of your mother bow down to you.
May those who curse you be cursed
and those who bless you be blessed.”

This blessing was going to be given to Jacob regardless of human involvement.  In Genesis 25:

“Two nations are in your womb,
and two peoples from within you will be separated;
one people will be stronger than the other,
and the older will serve the younger.”

Rebekah, just like Sarai, took God’s plan into her own hands.  God’s plan ALWAYS comes out in the end, but taking it away from God always has a consequence.  Not only will she not see Jacob ever again and have to live with her daughter -in-laws, the Hittites, but her son (the one she loved) now has consequences too.

So….I know a lot of mom’s name their son Jacob.  Did they know it means “heal grabber or deceiver”? Just wondering.

So here is the question of the day for anyone who wants to write their answer in comments. (Candace, you ready?)

Why was losing the blessing a bigger deal than the birthright??   Much bigger.

In Chapter 28, before sending Jacob to Paddam Aram (which is Haran….is this place familiar?? It was where Abraham stopped for a while when he left his hometown).  I put a map in the printable sections but click here if you want to print it now.  It will look like this: 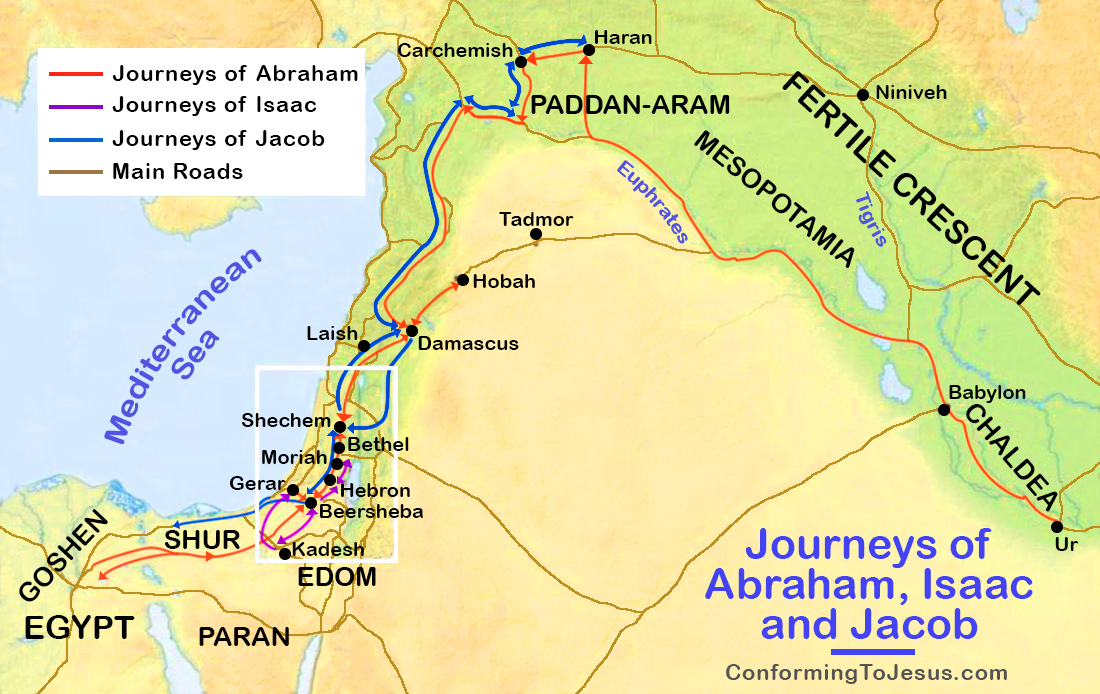 Isaac tells Jacob exactly where to go as he flees Esau’s plan to kill him    Here is the version in my head:

“Get your suitcase son…go to my old stomping grounds…find my father in law’s house.  You never met him, his name was Bethuel.  He’s dead,  so don’t worry about that.  Your mother, who planned this whole deception has a money hungry brother, Laban, who lives there, he’s a piece of work but don’t worry about that either, he will find you a wife.  Pack quicker son…you know your brother is a good hunter!  Anyway, remember God’s covenant, so make lots of babies…maybe 12 sons and a daughter sounds like a good number.  You will be a foreigner in this land, but Trump’s not President yet, so you will be safe.  One day your descendants will own this land!  Get a good night’s rest…if you can’t find a pillow, use a rock”  Now go on…I have to deal with Esau…evidently he is dating a new girl, an Ishmaelite this time! 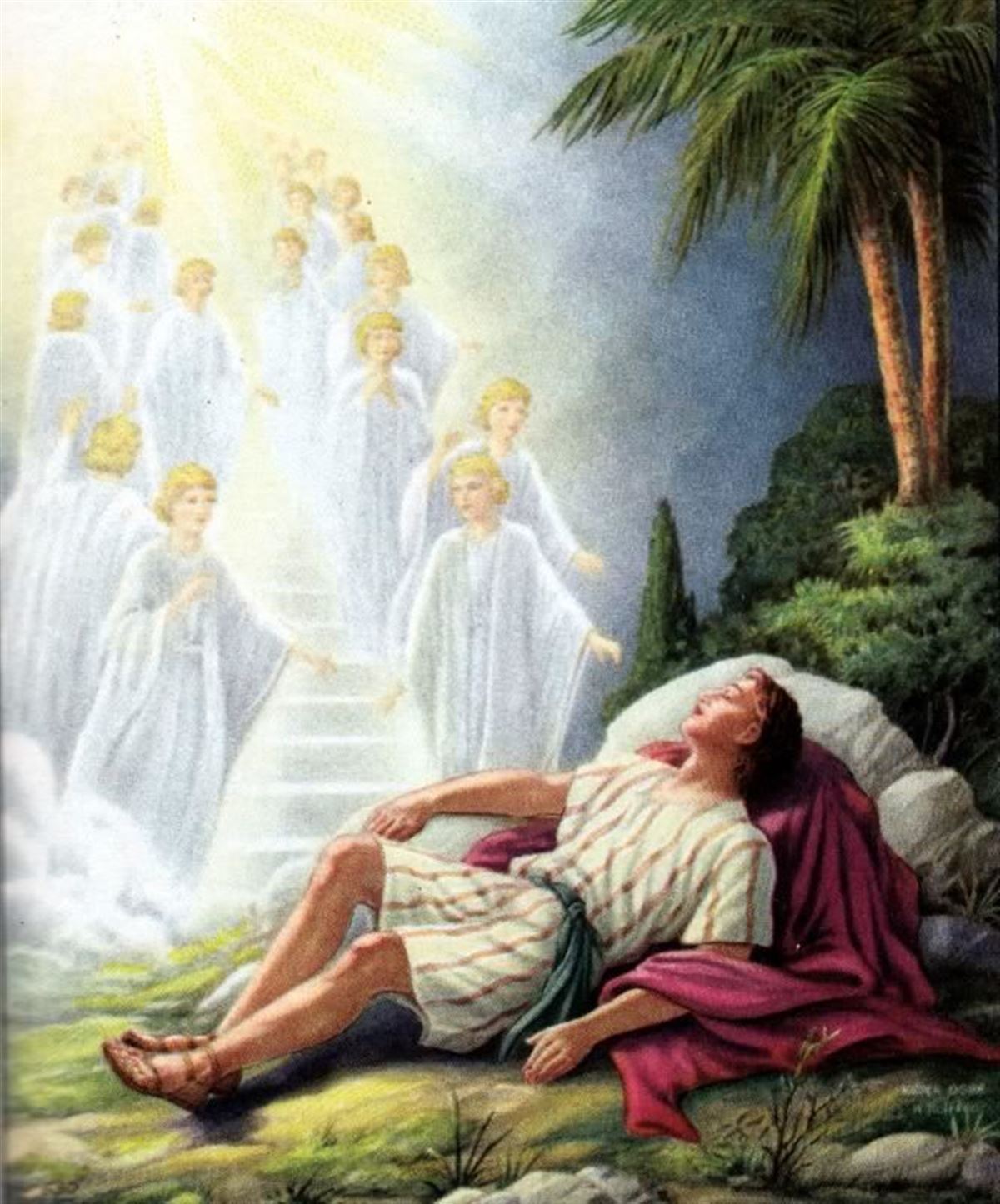 Not the best picture but it was the only one I could find that the angels did not have wings.  Why do we think angels have wings? Am I missing something?

Jacob has heard of God.  He is the God if Abraham and the God of Isaac, however that is where it stops (for now).  Abraham retells the covenant to Jacob but God comes to Jacob directly and confirms the Covenant in a dream.  He uses imagery that will make sense to Jacob (I could be wrong but I think it looks like a ziggurat like in chapter 11).

One phrase stands out to me and I can’t get past it: verse 20

Then Jacob made a vow, saying, “If God will be with me and will watch over me on this journey….”

I may be looking at it wrong, but I feel like Jacob is still on the fence about this God thing.  I feel like he is wrestling with it a bit….

I think the story is pretty clear (and I am sure you are about to kill me this is so long) So let me just clear up the ending.  So obviously Laban used “it is not our custom to give the younger daughter before the older” as an excuse.  The Bible described Leah as “weak eyes”.   Leah in Hebrew means “weary” but the Hebrew word can also be translated to “Cow” so draw your own conclusions!

So the deceiver gets deceived!   In verse 29:25 It says’ “why have you deceived me” I like to say “why have you Jacobed me!”  Anyway, it’s important to know that the wedding headdresses of this time was very modest and ornate.  Jacob would have only seen her eyes that night.