Here is the agenda for the next 2 weeks!

“Know for certain that for four hundred years your descendants will be strangers in a country not their own and that they will be enslaved and mistreated there.  But I will punish the nation they serve as slaves, and afterward they will come out with great possessions.

We left Egypt naming 70 descendants and 431 years later they count about 2 or 3 million.  In verse 8, the new king, to whom Joseph meant nothing, came to power.

The new king, Thutmose I, was threatened by the large number of Israelites so he enforced 2 plans:

The parallel to the Gospel is unremarkable:

Matthew 2:13 : When they had gone, an angel of the Lord appeared to Joseph in a dream. “Get up,” he said, “take the child (Jesus)  and his mother and escape to Egypt. Stay there until I tell you, for Herod is going to search for the child to kill him.” When Herod realized that he had been outwitted by the Magi, he was furious, and he gave orders to kill all the boys in Bethlehem and its vicinity who were two years old and under,

Shiphrah and Puah are likely representatives of a large group of midwives.  This is the first recorded instance in the Bible of civil disobedience.  In return, God blessed them with families of their own.

Chapter 2  The parents of Moses, Amram and Jochebed are both from the tribe of Levi.  When Jochebed puts the baby in the basket, the Hebrew word is tebah, which is the same word used in Genesis for the ark.  Both were used to save a life from the destructive force of water.  This passage is so visual.  I can picture his sister, Miriam, running down the river bank keeping an eye on the tebah.  When the Pharaoh’s daughter defies the decree herself to kill the newborn, Miriam suggests a woman to nurse the baby….it was the birth mother Amram!  Isn’t that amazing! 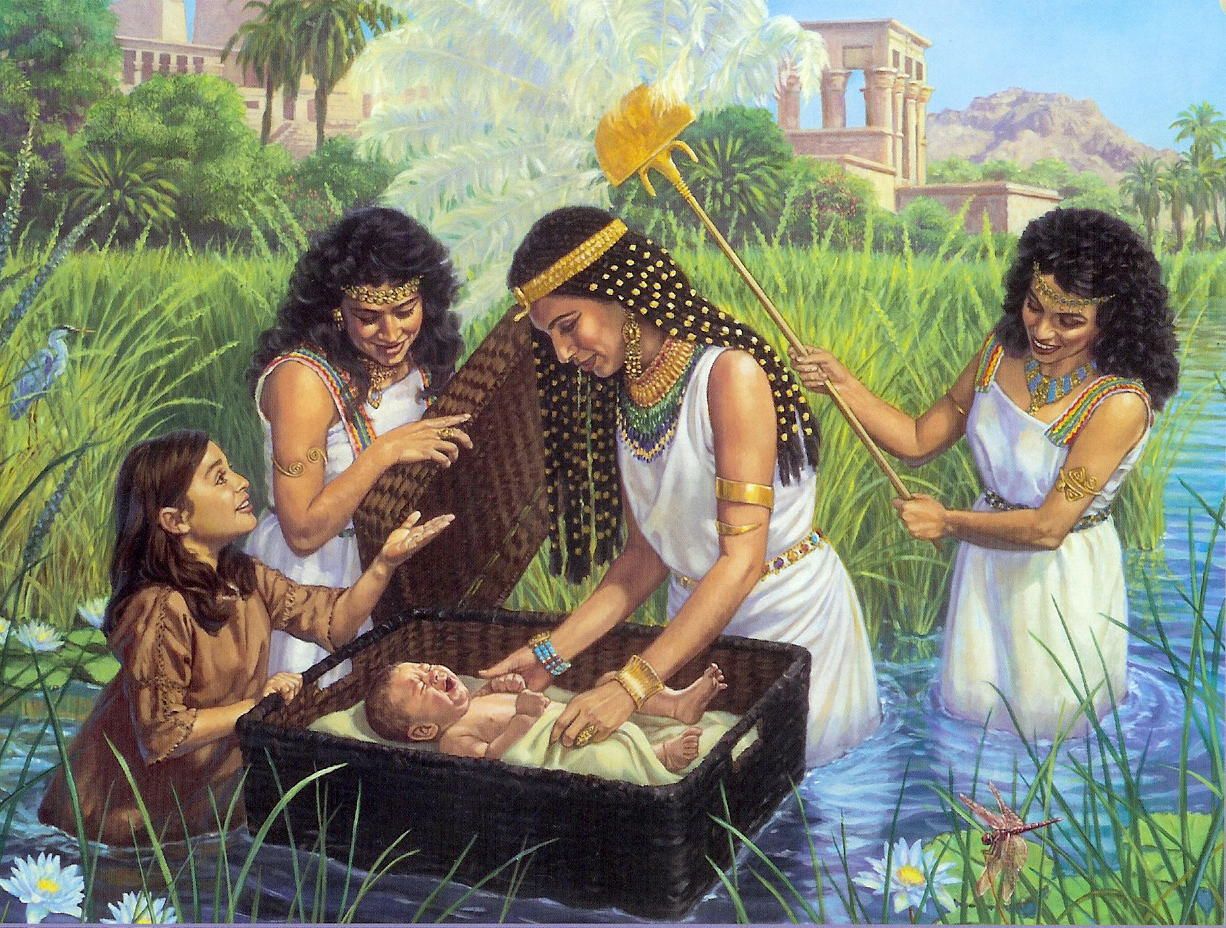 Later, Moses kills an Egyptian while Thutmose III is king, and it becomes known,  so he flees to Midian (an area settled by one of Abraham’s sons after Sarah died and he married Keturah)  where he meets Reuel (also called Jethro) and marries Zipporah. Back in Egypt, Thutmose III dies, (opportunity knocks to bring Moses back to Egypt!).  I think this is probably the most popular chapter for pastors to teach from because there is so much in it.  To try to find something new to point out is difficult.

But can I say, years ago I was talking to someone who just felt like her sins were  “the big ones” and God would not be able to get passed it.  She would never be good enough.  She had been loved on by the church, told all the right phases by her friends, probably had a coffee mug with 3:16 on it and just could not feel it.  Clearly, I am not “slow in speech” (my co-workers wish…I don’t shut up!) like Moses, but I just said “Woman, God used a murderer who was a fugitive, named Moses to save a nation, I am sure he can use you!”.

In short, God tells Moses, go back the the very place he committed murder, covered it up, ran as a fugitive.  So when Moses says “who am I” in verse 11 (not sure he wants that answered to be honest).  God does not answer him because IT DOES NOT MATTER who Moses is.  Instead God waits for the question that does matter….”Who are you!”.

“I am who I am”!  Yahweh.  He is SOVEREIGN.  He states the covenant, adds a few promises (which I love), like it will be flowing with milk and honey and you will not go empty handed when the nation flees.

Have a wonderful day.  Remember if God can use a fugitive that stutters who murdered someone, he can use you to be an instrument to help someone today feel the love of God.