I gotta tell you this is hard for me to know if I am confusing you more than before you read.  Usually I can tell by my students’ faces if I need to start drawing maps and arrows on the boards.  Today is the same as yesterday, just under the microscope.  So make sure you did not skip yesterday’s chapters.

Chapter 10 is the “set up” to the moist detailed prophecy of the entire Bible.  These are not Daniel’s words (even he is super confused), it is God telling us how He will unfold History…right to the last day!

Verse 2: “Now then, I tell you the truth: Three more kings will arise in Persia, and then a fourth (KIng Xerxes-we have not talked about him, we will in Esther), who will be far richer than all the others. When he has gained power by his wealth, he will stir up everyone against the kingdom of Greece. 3 Then a mighty king will arise, (Alexander the Great) who will rule with great power and do as he pleases. 4 After he has arisen, his empire will be broken up and parceled out toward the four winds of heaven (the 4 Generals). It will not go to his descendants (because the generals kills Alexander the great’s child), nor will it have the power he exercised, because his empire will be uprooted and given to others. 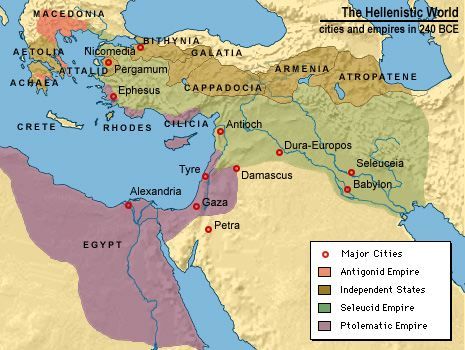 So the 4 generals divide the land.  Kills the heir to the throne.  But look at the map: You can see clearly 2 stand apart in strength.  The Seleucid and the Ptolemy Empires.

The rest of the  chapter describes in DETAIL the relationship between the North and the South. Marriages, Allies, battles against each other…We know God knows everything, but He know the details about everything that will happen.  Amazing.  This is the one chapter that Historians use in debates to prove the Bible was written after these events and not as a prophecy from God because if you detailed this chapter verse by verse it would freak you out in accuracy!

You know I like to teach proper debate of the authenticity of the Bible….what is the counter-argument to that? (put in comments so I know someone is out there)

21 “He will be succeeded by a contemptible person who has not been given the honor of royalty. He will invade the kingdom when its people feel secure, and he will seize it through intrigue.

Who is it??  ANTIOCHUS IV from yesterday.  He comes from the Seleucid dynasty. He gave himself a new name: Antiochus Epiphany (the glorious or the go).  The Jewish ‘pun’ is Antiochus Epimanes meaning “madman”.

Eventually the Seleucid Empire falls to the Ptolemy Empire. (Ptolemy empire was smart enough to partner with Rome (growing nation)….we knew that because of the Statue Dream.

29 “At the appointed time he (Antiochus) will invade the South (Ptolemy Empire) again, but this time the outcome will be different from what it was before. 30 Ships of the western coastlands (Rome will help) will oppose him, and he will lose heart. Then he will turn back and vent his fury against the holy covenant (against the Jews). He will return and show favor to those who forsake the holy covenant.

31 “His armed forces will rise up to desecrate the temple fortress and will abolish the daily sacrifice. Then they will set up the abomination that causes desolation. 32 With flattery he will corrupt those who have violated the covenant, but the people who know their God will firmly resist him.

From Yesterday, some of his acts while in Jerusalem

BUT the last verse above the abomination picture said:32 With flattery he will corrupt those who have violated the covenant, but the people who know their God will firmly resist him.

NOW stop and think about how many times we have read about a “foreshadow” of The Christ to come.  Even way back in Genesis we did a side by said comparison of Joseph and Jesus.  Antiochus is a foreshadow of the Antichrist.

Starting in verse 36 we shift to the ultimate mad man. Antiochus was the “trailer” to the movie.  The Antichrist is the movie. (The list of 10 below is NOTHING compared to what the Antichrist will do here on EARTH)

Even Antiochus worshiped gods like Zeus…but one will come that will exalt himself above all mythology.

I am trying to stay on topic here and I hate spending time on the Antichrist but you need to know kind of who he is.  Think of the Holy Trinity:

Well the devil wants everything that God has so he sets up his own trinity:

The King Who Exalts Himself

36 “The king will do as he pleases. He will exalt and magnify himself above every god and will say unheard-of things against the God of gods. He will be successful until the time of wrath is completed, for what has been determined must take place.

I am not going to spend much time on him but I will say:

45 He will pitch his royal tents between the seas at the beautiful holy mountain. Yet he will come to his end, and no one will help him.

Chapter 12- CHANGE THE CHANNEL to THE END TIMES!

But at that time your people—everyone whose name is found written in the book—will be delivered. 2 Multitudes who sleep in the dust of the earth will awake: some to everlasting life, others to shame and everlasting contempt. (the resurrection of the dead after-Final Judgement) 3 Those who are wise will shine like the brightness of the heavens, and those who lead many to righteousness, like the stars for ever and ever. 4 But you, Daniel, roll up and seal the words of the scroll until the time of the end. Many will go here and there to increase knowledge.”

5 Then I, Daniel, looked, and there before me stood two others, one on this bank of the river and one on the opposite bank. 6 One of them said to the man clothed in linen, who was above the waters of the river, “How long will it be before these astonishing things are fulfilled?” (When is the End time??)

“It will be for a time, times and half a time (the second half of the 7 year tribulation-3 1/2 years). When the power of the holy people has been finally broken, all these things will be completed.”

I have skipped so many cool verses BUT if you want more just ask me in comments.  I have taken lots of notes and I will try my best.  Today’s read literally taken us a month to break down (I WISH).

If this is all very confusing…think of it this way: When you do a read through again, and I hope you do, this will be a little clearer