I am going to read Mark 10 first.  I love the way he writes 😁  We begin with the controversial topic of divorce.   The Pharisees TEST Jesus once again to find fault in him.  What a GREAT lesson in this story about how to approach hard questions.  When discussing what the Bible says or what God wants…REFER to the Bible!  He refers them to the scriptures Moses wrote in the book of Deuteronomy 24.  Click here to read.  Moses wrote this so IF a man divorced a woman she was given a certificate.  Deut. 24 was written for the protection of the woman so that she could be taken care of.

So what Jesus says blows me away because I never thought of doing it this way.  Instead of discussing divorce, Jesus flips it and looks at marriage instead.  What does God say about marriage?  What was HIS plan for us? He goes back to the beginning: Genesis

6 “But at the beginning of creation God ‘made them male and female.’ 7 ‘For this reason a man will leave his father and mother and be united to his wife, 8 and the two will become one flesh.’ So they are no longer two, but one flesh. 9 Therefore what God has joined together, let no one separate.”

What a great way to answer any question.  What was God’s plan for us?  However, God planned for men to love their wives just as Jesus loved the Church and he also planned for women to be self-controlled and a helper to her husband.  (give me a moment, I need to go delete this blog from my husband’s feed).

It was customary in the time that the people would earn favor with  Rabbi’s and would bring their children to the Rabbi’s and get blessed by them.  I have memories of my mom bringing me to her priest after mass and having him “bless me”.  Ummmm??  So the disciples rebuked the people for this because it was putting Jesus on the same level as the Rabbi.  Jesus said, “bring them to ME” (not the Rabbi). Totally makes sense now.

The Rich Man- Notice that when Jesus quoted the 10 commandments he quoted the second set.  See, four of the 10 commandments are about our relationship with the Lord, and 6 are about our relationship with people.  Evidently, this man thinks he did not break the 6 regarding how he treated other people.  However, Jesus was pointing out that he was breaking the ones that were to honor God.  This man put money before God.  What are the other commandments?  Look at #1 and #2 His money was not bad, it was his love for money OVER following Jesus that was.  No one can live according to all 10 commandments.  Even with the best intentions toward other people.  So who can be saved?  It is impossible to do it on your own, that is why Jesus does it for us.  Sadly, the man walked away.  The invitation was given, and this man chose material goods (in his heart) over Jesus (in his heart).

They were on their way up to Jerusalem,

With each teaching, Jesus is making his way to the cross.  So for the 3rd time, He is foretelling the 12 what they need to be prepared for.  When Jesus predicted it in the past they either did not believe HIm or they rebuked Him for saying such things.  We see here that they are starting to “get it”.  HOWEVER, they did not fully understand the “kingdom”.  They believed He was the Messiah BUT they misunderstood the timing.  The person who sat on a ruler’s “right” hand side enjoyed the highest assigned position and the person who sat on his “left,” the second-highest. These brothers obviously believed that Jesus was the Messiah, and they thought He was going to establish His kingdom soon, probably when they reached Jerusalem.  Bless!

Mark records his last healing:  Mark probably included this incident in his Gospel because it illustrates how Jesus would open the spiritual eyes of His disciples that were still shut. The two descriptions of Jesus in these verses reveal the faith of Bartimaeus. The crowds simply described Jesus as “the Nazarene.” Bartimaeus had obviously heard about Jesus and had concluded that He was the Messiah. “Son of David” is a messianic title.

Prepare your hearts. We are heading towards Jerusalem 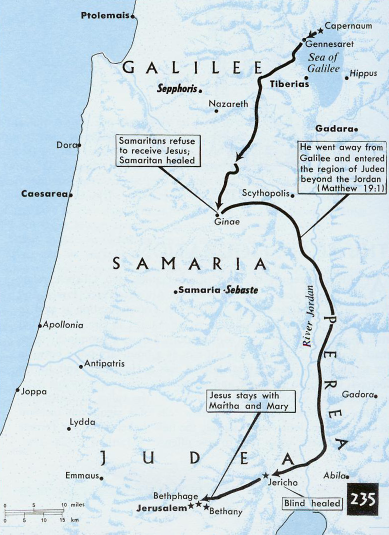